Pokémon﻿﻿ ﻿is a collectible trading card game. You take on the role of a Pokémon﻿﻿ Trainer. Your goal is to train a team of powerful Pokémon from those they have caught to compete against teams owned by other Trainers, and eventually become the strongest Trainer: the Pokémon Master!

Be sure to join the local Pokémon﻿﻿ ﻿Facebook group to connect with fellow gamers in the area.﻿ 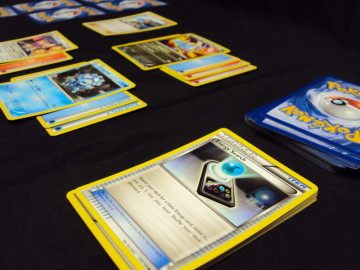 Normal deck construction consists of a minimum of 60 cards.  Each deck may contain no more than (4) copies of any card except "basic energy". Victory goes to the player that claims all of his "prize cards" first OR by defeating an opponent's "active Pokémon﻿" without that opponent having any Pokémon﻿ on their 'bench" that can move from the bench to be the active Pokémon﻿.

Constructed formats require players to construct decks from cards they own, prior to the event. Constructed play formats are based on which sets are allowed to be used. Each format has a unique list of banned cards.

In Limited events players must purchase unopened booster packs at the event and construct decks from the cards they receive from those packs.

We play swiss-style rounds. In swiss-style, the first round is paired randomly. Each subsequent round puts players with similar records against each other. For example, players that are 3-0 after three rounds would play each other in round four.﻿

We're always ready and willing to teach you how to play a new game! To learn how to play Pokémon﻿, stop in the shop, contact us, or visit the official Pokémon﻿﻿ Company website.﻿ 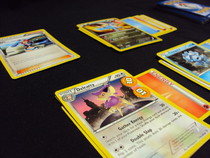 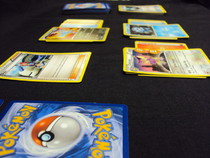 Get MORE for your stuff! See if you have any of the video games on our lists!

Connect with gamers, customers, and employees. Check in when in the shop for great deals and exclusive specials!

Laugh at us and laugh with us on our YouTube channel! Oh... and keep up to date with specials and such, too!